The Stanbic Bank Zambia PMI rose to 50.3 in February of 2022 from 49.9 in January, indicating a marginal improvement in business conditions. Read more 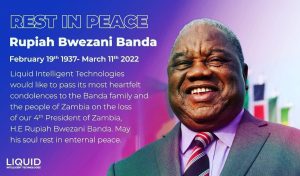 Over K3 billion was oversubscribed against the target borrowing of K2 billion during last Thursday’s treasury bills auction. Government has maintained its borrowing limit at K2 billion despite the overwhelming total bids received amounting to K3.004.21 billion from both local and foreign investors. This is contained in a notice issued by the financial markets department of the Bank of Zambia that investors offered a bid amounting to K2.356.30 billion in the 364 days’ tenor, but only K1.401.04 billion was borrowed. Read more: Zambia Daily Mail

President Hakainde Hichilema says it is extremely difficult to drive the economic agenda which citizens expect, without peace, stability and security. And Somalia’s Minister of Foreign Affairs and International Cooperation Abdisaid Muse Ali says he is glad to visit Zambia when President Hichilema is Head of State. Speaking when he met Ali, Monday, President Hichilema said government had a desire to further deepen the relationship shared with the people of Somali. Read more: News Diggers

Bitcoin For Fairness founder Anita Posch has called on Government to consider venturing into bitcoin mining in a bid to build reserves which can help to service debt. Bitcoin mining is the process by which new bitcoins are entered into circulation. Read more: Zambia Daily Mail

Policy Monitoring and Research Centre (PMRC) says it is elated by the establishment of the Ministry of Small and Medium Enterprises as well as the Ministry of Science and Technology. PRMC Acting Executive Director Mr Sydney Mwamba says the development is a positive step towards encouraging the Zambian young population to venture into entrepreneurship and innovative skills. Read more: Lusaka Times

Several multinational companies have halted operations as China widens its Covid lockdowns – among its biggest since the start of the pandemic. Tens of millions of people across the country face restrictions, including the entire Jilin province and technology hub Shenzhen, as authorities report record numbers of cases. Toyota, Volkswagen and Apple supplier Foxconn are among the firms affected. Read more: BBC News

The Ukrainian economy could shrink by more than a third this year if the war with Russia continues, the International Monetary Fund said. The global lending body said the country is already facing a downturn of 10% due to the invasion, which has hit major cities, destroyed airports and precipitated a refugee crisis. The IMF recently sent $1.4bn in emergency funds to Ukraine – the maximum allowed under its rules. Read more: BBC News

Russia has sent the clearest signal yet that it will soon default — the first time it will have failed to meet its foreign debt obligations since the Bolshevik revolution more than a century ago. Half of the country’s foreign reserves — roughly $315 billion — have been frozen by Western sanctions imposed after the invasion of Ukraine, Russian finance minister Anton Siluanov said on Sunday. As a result, Moscow will repay creditors from “countries that are unfriendly” in rubles until the sanctions are lifted, he said. Read more: CNN

US oil prices briefly tumbled below $100 a barrel on Monday, unwinding a significant chunk of the recent spike caused by Russia’s invasion of Ukraine. Oil plunged more than 8%, touching a low of $99.76 a barrel. That means oil has lost almost roughly quarter of its value since touching a near 14-year high of $130.50 a barrel on March 6. It’s the first time oil has traded below $100 since March 1. Read more: CNN 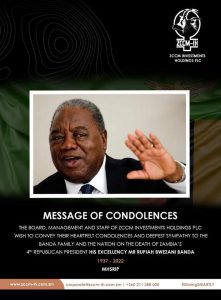 In 162 trades recorded yesterday, 25,776 shares were transacted resulting in a turnover of K72,544. Share price gains were recorded in Zambeef of K0.01 and in CEC Africa on the quoted tier of K0.03. A share price loss of K0.01 was recorded in Copperbelt Energy Corporation. Trading activity was also recorded in Airtel, First Quantum Minerals Zambia, Chilanga Cement, PUMA, Standard Chartered Zambia, Zanaco and Zambia Sugar. The LuSE All Share Index (LASI) closed at 6,669.93 points, 0.05% down from its previous close of 6,672,97 points. The market closed on a capitalization of K69,862,350,687 including Shoprite Holdings and K35,079,665,247 excluding Shoprite Holdings.